The city of adventure

From there to back again (usually on a bike)

It’s a slippery slope towards trailrunning…a race that didn’t include dressing up, and was 10 miles instead of 10k, but my fancy dress partner in crime had just as much fun as I did so I think it may be a positive step in the direction I am trying to steer our events. Although that said, I read Lisa Jackson’s ‘Your Pace or Mine’ on the train home for Christmas, and really enjoyed all the wonderfully human stories and tales of dressing up and running the world. I have loved our multiple Santa clad runs, gorilla races, and looking for Wally in the hoards on Clapham Common. I just don’t want to dress up every time we head off for an adventurous run.

We took part in the DeadDrop: Santa Search and Rescue event and joined a merry band of Londoners, marauding about the streets in search of clues that would unveil the final location of kidnapped Santa, so that we could rescue him and return the spirit of Christmas to its rightful place. It was actually quite an educating outing. We discovered new statues (to the animals killed in wartime, and a piece of the Berlin wall outside the American Embassy), and new routes across Hyde park and environs. Having evil elves attempt to squirt us with water pistols was a tiny price to pay, and we didn’t mind skipping the pint and 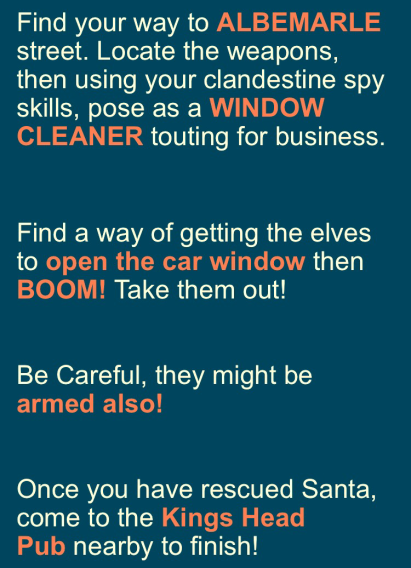 minced pies in favour of a tiny brunch cafe we had passed when in search of a clue earlier on. All in all, a fun outing and great way to spend a couple of hours with a good friend.

Event 5 relied even more on the kindness of others. I was in the North for a few days over Christmas, and had been enjoying the country lanes for some lovely long runs sans traffic. I had entered the Essar Chester round the walls race, which is one of the oldest races in the country, with the Boxing Day event being held most years since 1972. Unfortunately there were no trains running on Boxing Day. I looked at possible routes in order to run there and back, and the distance wasn’t too crazy, but it would have been along busy roads without proper pavements for much of the way, and that didn’t feel like a good option. In the end I was given a lift by the lovely J. It was a cold and windy Boxing Day morning as I trotted down to the racecourse to join the swelling ranks of runners. There wasn’t much shelter so many were jogging up and down the track in an attempt to stay warm. I went for the option of ‘wearing warm clothes’ in the knowledge that I would get hot and sweaty over the next 6k, rather than running the risk of getting horribly cold before or after.

As it was about 6,5km long, the run was over in the blink of an eye. But the route was great fun, along the ancient canals and atop the tiny city walls of Chester. The stones are worn away from years of soldiers, travellers, tourists walking them, so careful placement was required. But the sun came out, everyone coming into town for the sales was cheering on the runners, and it felt great to push the speed in the knowledge that it was just a short run. I managed to mostly pass others, until the final stretch when a guy running in shorts came up on my left and ran towards the last bend. I couldn’t let that happen, and happily sprinted the last 200m, pipping him to the post in the las

t few seconds. As I milled about with everyone else, enjoying the warmth of a nice run in the winter sun, and collecting the commemorative mug, I soaked up the atmosphere, and just felt happy. I realised that this is possibly what it feels like to be part of Parkrun, and vowed to take part in 2017, even if it was making that shared 5k a part of a longer run.

These were two very different races, in opposite ends of the country, but the lasting impression from both of them was one of comradery and the enjoyment of a shared experience. All of this is foreshadowing to a major theme in my next post, a review of 2016 and look ahead to what 2017 has to offer!

What I’ve been thinking lately

Running, pacing and motivating others around me

Take to the Fringes

The Ups and Downs of Life on the Fringe of Society

Zen and the Art of Climbing

An inquiry into adventure

1 person, 39 marathons, the perimetre of Wales

BeautyBeyondBones
Dave Archer: What I think about when I go running...

Learning from the good, the bad and the ugly experiences…always hoping to live the dream!

All things related to running.

Healthy food and a healing lifestyle

The road to the 2015 Brighton Marathon and whatever comes next .