The city of adventure

From there to back again (usually on a bike)

Some tour groups had pulled out, tourism to Turkey as a whole had plummeted, and for a while the site for the marathon was down, but FCO advice stayed the same, and my Vitality-BA ticket was cheaper than going up north. Besides, I needed a holiday.  So the day before the race found me taking on the challenge of trying to find the race pack…guidance online said that it was a 10 minute walk from the metro, but there were no signs as to which direction, and no one looking marathon-y walking purposefully anywhere at all. Students found nearby insisted it was ‘impossible’ to walk, while a security guard got frustrated with them and tried to make himself understood. We followed his directions and got there in the end. As numbers were down, they were allowing locals to sign up there and then (many for an additional free 8k ‘heroes run’) so the expo was set up for that, and appeared to follow the logic of the Grand Bazaar: To find the spot to pick anything up you had to follow a series of cryptic clues. In Turkish, and possibly using abjad (in Turkish- Ebced) codes. Though I may now be slipping into Altun’s wonderful ‘Songs my mother never taught me’ which is interwoven with my memories of this trip.

We asked at the info booth and one girl laughed (and we imagined her grin was saying’good luck’ ). But…we made it, and the t-shirt I was handed was in my size, and really everyone was extremely helpful and lovely, it was just a bit (lot) chaotic. Unfortunately the way back to town was also epic. Paths were closed (with the end in sight). We had to climb culverts, walk on motorways, and then learn the hard way that the metro line that looked quicker, was most definitely *not* the best way to Eminönü! We did get there in the end, and the fish bread with pickles eaten on the dock was a worthy reward. We then spent the rest of the day carrying our bags around chatting to people who asked about the race- each distance was assigned a colour and a giant tote bag. Great for making friends! (although they looked a little out of place at the Galata tower restaurant that evening- highly recommended, and wonderful views if you visit, but you do have to book ahead).

6am on Remembrance Sunday (feeling the 3 hour time difference when I woke up), a light rain fell over the dark Istanbul streets and I scurried down and up hills dressed for the race and trying not to stand out (I will admit to checking the current weather on the app when I woke up and heard the rain, hoping it was actually a loud shower or a neighbour doing a very early laundry cycle). Once in Taksim square, the system was for the crowds to push and fight one another to squash onto shuttle buses taking everyone to the Asian side of the city. Each time buses pulled up they sent women to a different area where there would be a ‘female security’…but we didn’t stand a chance. If you were not in the first wave, you were not on the coach. The silver lining was that we were therefore on a later bus with mostly women, so it didn’t smell as bad!

Heightened security (and international nerves?) meant that there were few runners by big city race standards. The 10 and 15k runners dwarfed the marathon pen, and there was a multitude of participants with black numbers who were walk/running/wandering an 8km ‘heroes’ route, but were mingled in with all the other groups. There were women in full religious covering and running shoes, with their families in tow (lots of buggies). So the flip side of international tours and participants pulling out was that more local people participated, hopefully getting a little taste for running and building the culture out here!

Unlike previous years (as I was told), there were no water and food sellers near the start. The prospect of 42,2 km without anything to eat made me more than a little nervous (an email was sent out with information, but there were no options for any languages I understand so  I wasn’t convinced there would be anything at all). Luckily my friend sourced a banana (on the black market?) just as the race was about to begin. It was mostly psychological at that point but I relaxed and began to enjoy myself. After having problems with my piriformis and having to drop out of the Ridgeway 86 mile race in August, this was the first time I’d tried to go longer than 21,1km (ignoring the RAB mountain marathon, but that was a run/walk bog slog in the Yorkshire dales, completely different). My physio had frowned, but she said that as she knew I’d try it anyway I should listen to my body and take it easy. So that was the gameplan!

The run? It was difficult. It got hotter and hotter as we went along. On the first hill was a sign saying yavaş yavaş. I thought it must be some sort of encouragement but it actually means ‘slow down’! In the first few km men were singing military marching songs and screaming as they ran under the bridges for the echo effect, which was a little disconcerting (with hindsight they were probably part of the 8km heroes run which commemorated those who died in the coup).

Once we hit the highway to the airport it was 20•C and the fumes from the tarmac wafted over my senses as we ran into the wind. At times my right leg buckled and I felt the effect of severely reduced training levels (though I had done lots of core and strength work and maintained a base level of running). I took it easy, drank small amounts of water when it was available, and ate a couple of apple quarters along the way. With everything I’ve said it was a lovely atmosphere, not too many people out cheering but everyone who saw us shouted a ‘Bravo’ and all the kids waved and smiled (and we’d left the shouty people behind). I ran with different groups and was encouraged on by a couple of people when my leg hurt more towards the end. We all pitched in and took it in turns pushing a guy in a horizontal-hand propelled wheelchair when we got to the hills (it was most definitely not designed with cobble stone inclines in mind), and it felt a bit more like a club run than an international city marathon. 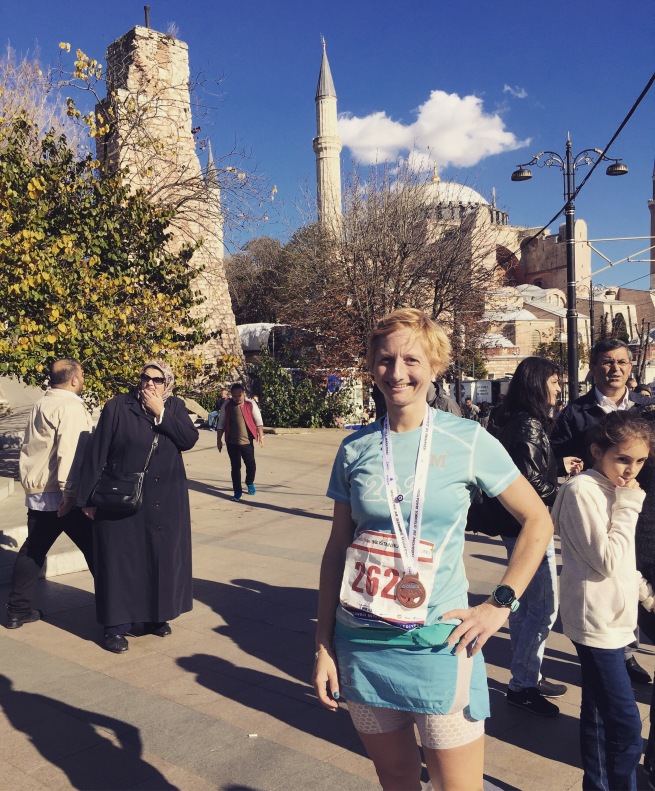 I had told my friends that with all of the above, I would probably finish in about 4:30ish (they were running the 10k then going shopping!). I turned out of Gülhane park into the final, spectator lined hill that leads up towards the Blue Mosque, with minutes to go before that time. I heard my name and there they were, cheering me on to the end. I smiled, waved, and pushed on to the finish line where all those groups came together to congratulate each other on a job well done.
After food (and an entertaining interlude with a green eyed charmer named Ceya who had me participate in a pottery breaking ritual for a table of Arabic guests behind us), my friend and I set off to the Çemberlitas hamami for a relaxing rest on a hot marble platform, a scrub and soap massage followed by a relaxing oil massage. It was heaven! The day ended with shopping and tired eyes in a secretive rooftop restaurant near the Galata tower that has the atmosphere of a place where coups are planned, and delicious food!

So Cons: more signage and information would have been helpful (getting race packs was pretty difficult); The whole ‘pushing on to shuttle buses’ was horrible, and if I do it again I will find a way to get to the start without using them; The route along the motorway towards the airport was grim, and the part along the Golden Horn could have actually been along the water as that is a very pretty running route.

Pros: the views on the Bosporus Bridge (polemically renamed the 15th July Martyrs Bridge) are stunning; The return leg from the airport had beautiful views of the city’s mosques, and the sea lapped away at our right; There turned out to be regular (and friendly) water stations; The finish in Sultanahmed square near the Aya Sofia and Blue Mosque was just wonderful; Hamami after the race- every marathon should have one! I woke up the next day with legs that didn’t hurt, and walked an average of 20,000 hilly steps on my Garmin each day for the rest of the trip.

All in all I had a great time. I probably won’t be back next year as there are other challenges to come, but at the expo I picked up a couple of flyers for other Turkish races (Ephesus ultra trail in March and Bodrum ‘Bodrun 50k’ in November) over the next year, so watch this space!

What I’ve been thinking lately

Running, pacing and motivating others around me

Take to the Fringes

The Ups and Downs of Life on the Fringe of Society

Zen and the Art of Climbing

An inquiry into adventure

1 person, 39 marathons, the perimetre of Wales

BeautyBeyondBones
Dave Archer: What I think about when I go running...

Learning from the good, the bad and the ugly experiences…always hoping to live the dream!

All things related to running.

Healthy food and a healing lifestyle

The road to the 2015 Brighton Marathon and whatever comes next .